Often, mild psoriasis appears on the skin as clear pink-red papules (nodules that rise above the surface of the skin), which merge into plaques with silvery white scales.

In moderate and severe forms of the disease, the inflammatory process leads to damage to the musculoskeletal system and the cardiovascular system. Psoriasis has a recurrent course (recurrent symptoms after complete or partial recovery) and a tendency to cause comorbidities that affect the patient’s quality of life.

The disease may be based on several triggers. However, it is still not known exactly which of them is the main and which is the second. Immune system dysfunction is considered to be the main cause that explains the occurrence of psoriasis. Cells that aim to destroy disease -causing agents begin to attack their own cells (especially the skin). As a result, an inflammatory process develops, which leads to accelerated cell division of the epidermis (epidermal hyperplasia) and the formation of papules and psoriatic plaques. 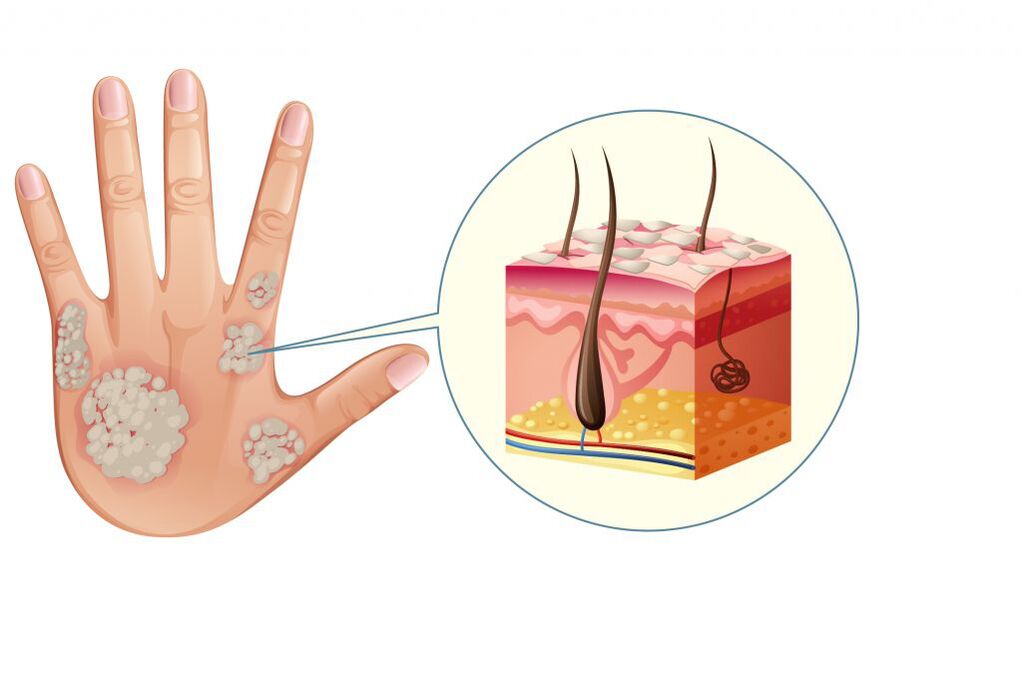 To date, more than 40 chromosomal regions have been identified that are associated with the risk of developing psoriasis. The onset of the disease can be due to a weakening of the immune system against the background of stress, infectious diseases, endocrine. Psoriasis often accompanies allergic conditions and immune deficiency, which is based on a violation of the immune response. In addition, psoriasis can be triggered by certain medications (antidepressants, beta blockers, non-steroidal anti-inflammatory drugs).

Depending on the localization of the pathological process, different types of psoriasis are distinguished. The most common is abusive, orcommon, psoriasiswhen a clear pink papule appears on the skin, which merges into a plaque covered with silvery white scales. In case of damage to the scalp (seborrheic psoriasis) rash in the form of yellowish scales can descend on the forehead, forming a seborrheic "crown". In patients with metabolic disorders, plaques may show exudates, fluids secreted during the inflammatory process (exudative psoriasis). In childhood and adolescence, especially after streptococcal infection, the disease can become acute, with numerous bright red teardrop-shaped papules appearing on the skin with slight exfoliation and infiltration (psoriasis guttate). Occasionally there is pustular psoriasis, characterized by the appearance of pustules against a background of reddish skin, more often in the arches of the feet or palms.Psoriatic erythrodermamay occur against the background of exacerbation of normal psoriasis under the influence of provoking factors. Dry white scales cover the skin, it becomes bright red, swollen and hot to the touch. Running very hardZumbusch psoriasis is common. It is characterized by the fact that small purulent vesicles appear on the reddened skin, which, combined, form a "purulent lake".Psoriatic arthritisaccompanied by damage to the joints and develops simultaneously with the rash or precedes them. 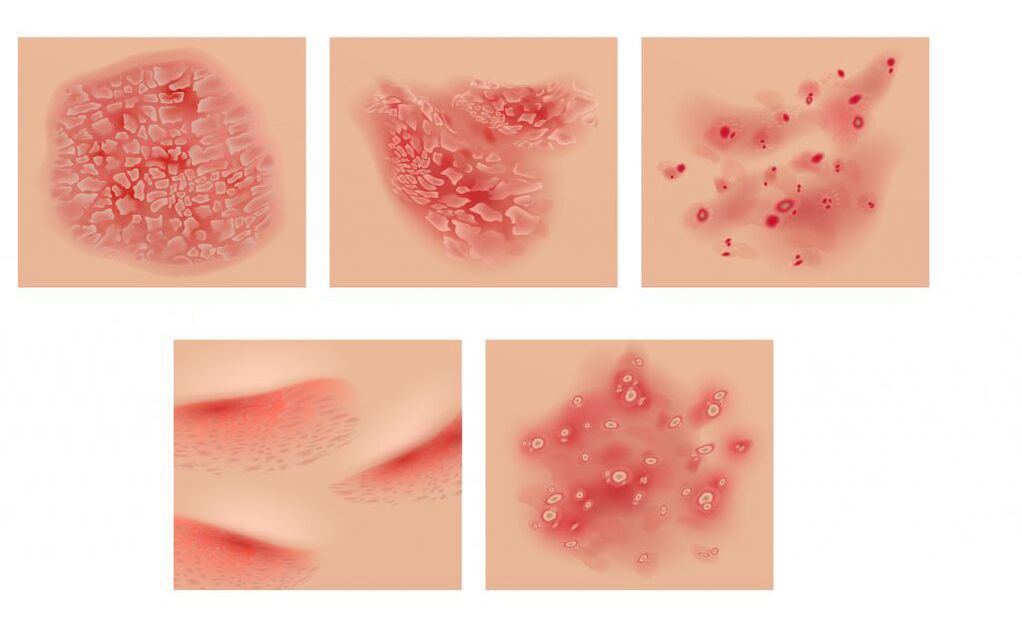 The skin form of psoriasis is accompanied by the appearance of bright pink dotted papules, sometimes in the form of droplets. Together, they form a plaque covered with silvery white scales.

The rash is located on the extensor surface of the arm and knee joint, on the scalp, in the lower back and sacrum.

The top layer of plaque is formed by dead epidermal scales that are easily removed. Initially, they occupy the center of the plaque, and then fill the entire area. When the scales are removed, a bright shiny red surface stands out. Sometimes the plaque is surrounded by a pink rim - the zone of further growth, while the skin around it does not change. The rash is accompanied by severe itching. With psoriatic erythroderma, the patient experiences fever (fever with chills) and severe itching on the background of a rash all over the skin, and increased lymph nodes.

With a long course of illness, hair and nails may fall out.

Generalized Zumbusch psoriasis is very difficult. Purulent eruptions cover the entire skin and are accompanied by severe fever and intoxication. Psoriatic joint damage is characterized by pain and redness of the skin on the articular surface. Any movement is difficult, inflammation of the ligaments and tendons develops. With psoriasis, the nail plate is very often affected, while precise indentations appear on the surface of the nail ("thimble" symptoms). 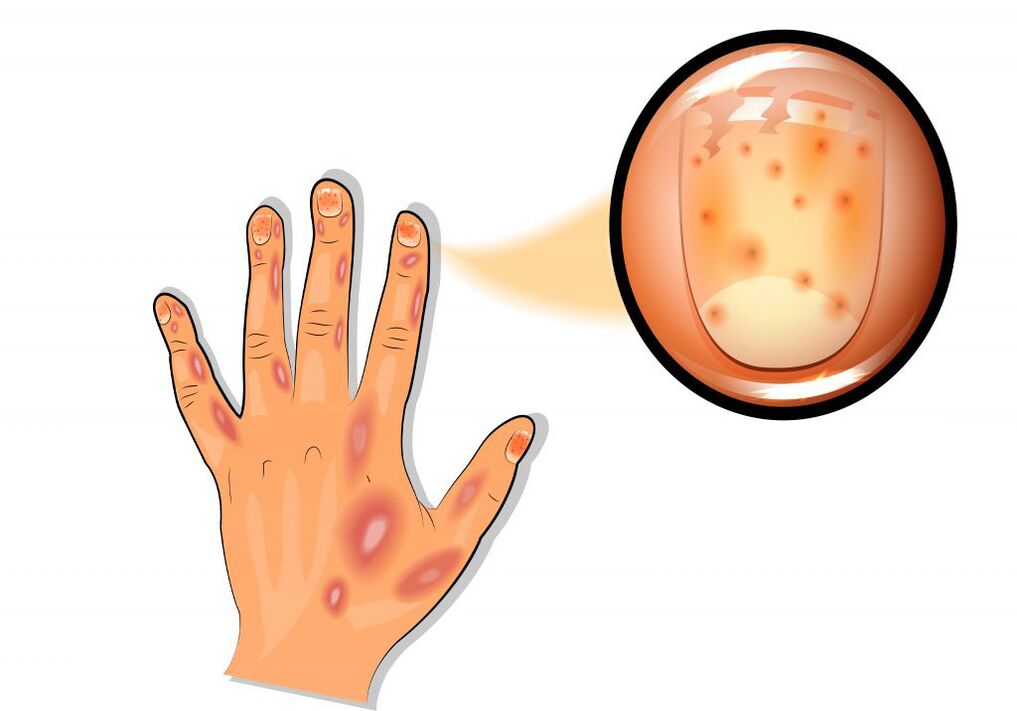 Small, reddish and yellowish brown spots appear under the nail plate at the base (symptoms of "oil spots"). Dystrophic changes in nails and hair often develop.

In children, especially infants, the symptoms of psoriasis have their own specifics.

In areas of redness that occur in the folds of the skin, effusion and slight exfoliation of the upper layer of the epidermis may occur. This image resembles a diaper rash or candidiasis. Sometimes a rash appears on the skin of the face or in the genital area.

It is possible to identify the disease based on the symptoms of the psoriatic triad (white stearic surface of the papule; a reddish shiny film after peeling of the scales and highlighting the protrusion of blood after its removal).

An additional feature is the Koebner phenomenon. It lies in the fact that in areas of skin irritation, after 7-12 days, erythematous scaly rash appears (areas of redness and flaking in areas of scratches, scratches). Occasionally, to confirm the diagnosis, histological examination of a biopsy of the affected skin area is performed. In addition, clinical and laboratory examinations are required: clinical blood tests, biochemical blood tests (total protein, protein fraction, C-reactive protein, ALT, AST, LDH, creatinine, electrolytes: potassium, sodium, chlorine, calcium).

If a rash appears, which often occurs on the background of infectious diseases, skin injuries, stress, you should consult a therapist or dermatologist. In the event of systemic damage to the patient’s body, they can be referred to an ophthalmologist, endocrinologist, gynecologist or other specialist.

Psoriasis affects both the skin and the musculoskeletal system, as well as internal organs. When the rash appears only on the skin, the preparation of local glucocorticosteroids, ointments containing synthetic analogues of vitamin D3, activated zinc, salicylic acid and other components are recommended. Hormone creams should be used with caution on skin prone to atrophy.

It is necessary to take into account the possibility of hormonal disorders with prolonged use of steroid creams.

The effectiveness of the hormone cream is increased in combination with salicylic acid, an analogue of vitamin D. For the treatment of severe forms of psoriasis, second -generation aromatic retinoids, which are based on acitretin, are used. The drug slows down the proliferation of epidermal cells, normalizes the process of keratinization, and has an immunomodulatory effect. Phototherapy (medium wave UV therapy and PUVA) in combination with retinoids is also recommended. As a systemic therapy, doctors may prescribe immunosuppressive agents. If necessary, prescribe detoxification and desensitization therapy, plasmapheresis.

In 10% of patients, psoriatic arthritis develops, affecting the spine, arm and leg joints. The patient experienced joint pain and morning cramps. Features of psoriatic arthritis include asymmetry of the place of its manifestation, which can be combined with damage to the nails. Psoriasis is often accompanied by concomitant or comorbid diseases.

Due to inflammatory vascular lesions, the risk of coronary heart disease and stroke is increased.

It is also possible to develop diabetes and Crohn's disease. In some cases, complications of psoriasis can lead to disability.

Measures to prevent psoriasis are aimed primarily at strengthening the immune system. Skin care should include hydration and nutrition. With a tendency to allergies, it is necessary to control diet, avoid fatty and spicy foods, excessive consumption of carbohydrates, potatoes. A mandatory component of psoriasis prevention is vitamin therapy.

In addition, the function of the immune system largely depends on the state of the nervous system. People who are highly responsible, have busy work schedules, and experience persistent negative psycho-emotional effects are more prone to autoimmune diseases, including psoriasis. Therefore, the prevention of psoriasis, along with physical healing measures (abandoning bad habits, physical activity), should also provide the achievement of psycho-emotional comfort.

The information in this section should not be used for self -diagnosis or self -treatment. In case of pain or exacerbation of other diseases, only the attending physician should prescribe diagnostic tests. For proper diagnosis and treatment, you should contact your doctor.